A couple of years ago my husband, his parents, and I went on a cruise to the Bahamas. At one the ports, my in-laws came back with a Tortuga Rum Cake. I’d never had one before, but they promised me I was in for a treat. A few weeks later I got to sample it, and gosh were they ever right!

Fast forward to Father’s Day this year, and while the cake was long gone,  fond memories of it definitely remained for all involved! I knew that if I could make something that was even half as good as the real deal everyone would be over the moon. 🙂

If you’ve never had a Tortuga rum cake, the best way I can describe it is a buttery bundt cake that’s soaked in rum until it’s velvety smooth. It’s like a dessert and a cocktail all in one! 😀

When I set out to make a copycat version, I assumed someone would’ve already done the work for me. Sadly, just about everything I found was made with boxed cake mix, instant pudding, or both.   I had neither of those item on hand, and it seemed a little crazy to run out to the store when I should have everything necessary to make the cake from scratch. Well, everything except a recipe!

Thankfully, a few folks had done the initial legwork for me. It still took a little experimentation, and a lot of luck, but I think I got darn close on this one. The cake has that lovely buttery flavor with the velvety smooth, nearly pudding-like texture, and of course, that little kick!

This recipe uses a homemade pudding mix from Alejandra at Always Order Dessert, which is absolutely fabulous. It adds all the moisture a boxed mix would, but without having to run out and buy mix. You will end up with some extra, but trust me, you’ll have no trouble at all finding a way to use it. If you’d rather not make the homemade mix, I would imagine boxed pudding would work just fine.

This is also a little unique in that there will be plenty of batter here to make two cakes – I brought this cake to both Father’s Day celebrations, but only used once recipe, and there was plenty of cake to go around at each location. You could definitely make it in one Bundt pan, it will just be a larger cake than the typical Tortuga.

Enjoy! I hope this brings a little of the Caribbean home to you! 🙂 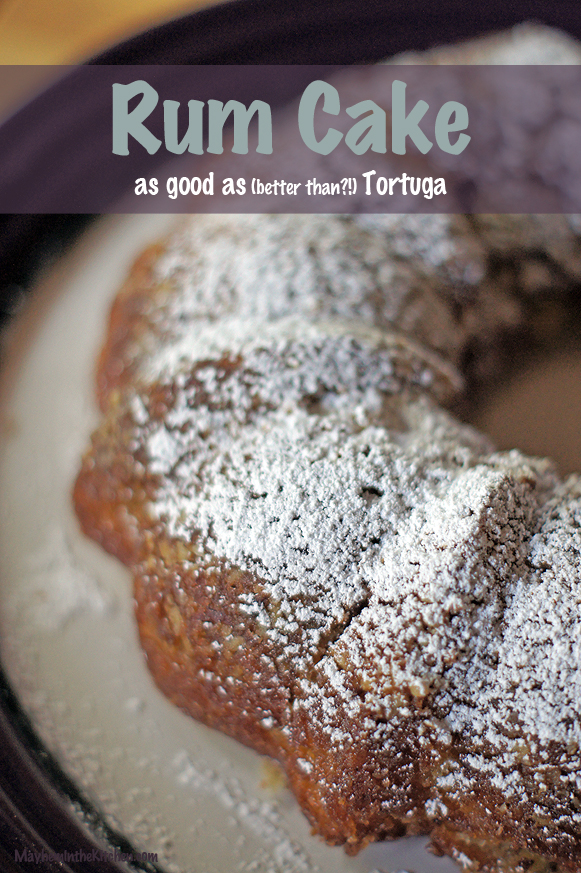