\ Vegan Chocolate Cupcakes with Chocolate Frosting | Mayhem in the Kitchen!

You’d be hard pressed to find a bad chocolate cupcake. Well, unless of course you’re talking about vegan cupcakes. Even those styrofoam Hostess ones are somewhat palatable, but vegan cupcakes taste like sawdust! 😉 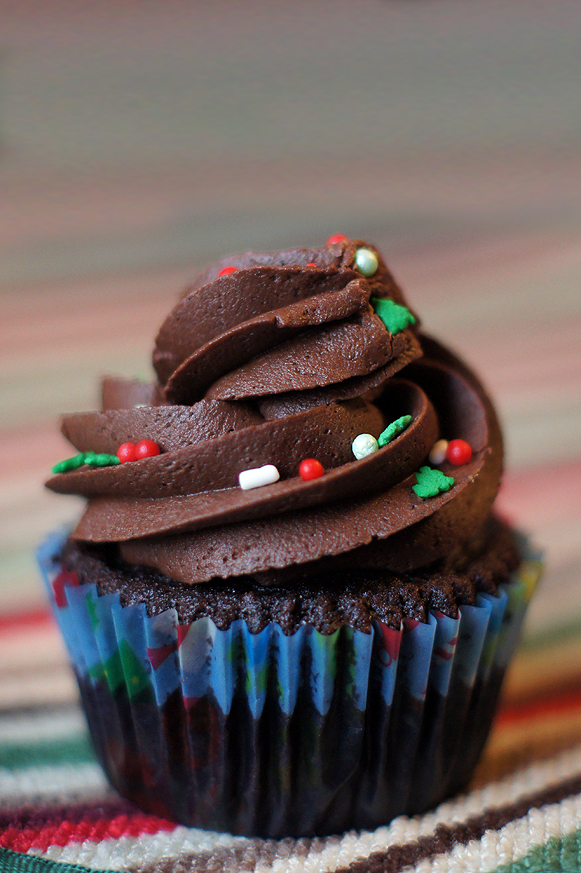 I made these for a neighborhood dessert potluck, and was faced with a dilemma – they’re vegan, so I could do my fellow veg*ns a favor and label them accordingly, or I could simply put them out and let the omnivores devour them, completely unaware what they were eating was cruelty-free.

Ultimately, I decided to make a teeny tiny sign that said they were “vegan, but super yummy and omnivore approved” in hopes that some guests would either ignore the sign, or give this rabbit food a try.

Shockingly, even with a dozen other desserts on the table, many brave souls ate vegan cupcakes, and, dare I say it, enjoyed it!

These are really fantastic – moist, chocolatey, and a little bit fudgey. Everything you want in a chocolate cupcake, plus the bonus of a clear conscience!

I’ve made these for everything from birthdays to Easter to Christmas, and they’ve been a hit each and every time. If you’re looking for a chocolate cupcake that both vegans and omnivores will be raving over you absolutely can’t go wrong with these! 💖 💖 💖

Adapted from Vegan Cupcakes Take Over the World