\ Fudge Brownies with Cookie Dough Frosting | Mayhem in the Kitchen!

Yesterday we had a double birthday celebration at my office, and my coworker was bringing in bacon chocolate rice krispie bars, so I knew I had a lot to compete with. Initially my plan was to go with a classic chocolate cake, which led to fudge brownies, which led to fudge brownie cupcakes, and if you’re going to make cupcakes, you need a great frosting… which is how you end up creating something that necessitates sending your coworkers an email warning them about catching the diabetes.

The other day I was telling you those Peanut Butter Bars were out of control, but that was a bit premature as these are probably worse. Their saving grace is that they are incredibly rich, so you probably won’t find yourself eating an entire tray of these like you could with those bars.

I will openly admit that I was terrified by the prospect of using 8 eggs and twice as much sugar as flour, but the end result is a delightfully fudgey brownie with a beautiful delicate-yet-crunchy top that hints of creme brulee.

These could easily stand on their own, or would also pair well with a nice ganache or a thin layer of almond buttercream, but I went all out and heaped on a thick chocolate chip cookie dough icing ala Ben and Jerry’s Half Baked ice cream. 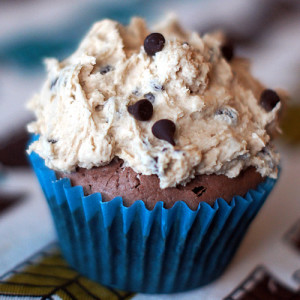