We’re headed out to a Halloween Party tonight and were told to bring whatever we’d like. Of course, I immediately gravitated toward cupcakes because they’re the perfect party treat in so many ways – single serving, easily themed, universally loved, friggin adorable……

I scoured the web for ideas last week, and this idea for graveyard cupcakes from Better Homes and Gardens came out on top. I thought they were SO cute, and I loved that using candy and cookies for the majority of the decorations would make them quick to assemble.

Unfortunately, I severely underestimated how difficult it would be to find vegetarian mellowcreme pumpkins the week of Halloween! Brach’s version contains gelatin, so they’re out, but most of the time grocery stores will have candy corn and mellowcreme pumpkins in their bulk bins that are vegetarian (though not vegan – they still have honey and eggs.) I visited FIVE different grocery stores in search of the pumpkins, (that’s not including department and hardware stores where I checked and re-checked the labels of bagged candy) and in each case they were only stocking Brach’s as though they have a monopoly on the waxy Halloween candy market! Anyway, yesterday I was ready to give up, and stopped at the grocery store near my work (the same chain as the store near my house) with the intention of buying the regular ones and just not eating any myself. I walked in and noticed that the Halloween section was very picked over and began to worry that they might not even have the bagged version, but when I turned the corner I was greeted with not just one but TWO bins of mellowcreme pumpkins!

I was so excited I had to text my husband a photo of it. He didn’t reply, but I know he was just as thrilled as I was.  😉

Anyway, once I had the requisite ingredients, it was time to get started. For the cake, I followed a method similar to the vegan candy corn cupcakes except I swirled the two colors of food coloring around to create a marbled look. Easy peasy.

To decorate, I created spooky trees by piping chocolate almond bark onto wax paper using a small round Wilton #5 tip, and created tombstones by removing the filling from Oreo cookies and cutting the edges off of two sides with a serrated knife. Then to put it all together, I swirled almond buttercream icing onto the top of the cupcakes using an extra large Ateco #808 tip, stuck in the decorations along with some bone sprinkles (from Target) and the elusive mellowcreme pumpkins, and finished it off by sprinkling chocolate jimmies and -this is very important – crushed cookies over the top. Whatever you do, don’t skip the crushed oreos! They tie it all together. Without them there’s no cohesion amongst the decorations and it will honestly look like you just sprinkled mouse poo all over your cupcakes. Trust me on this one! 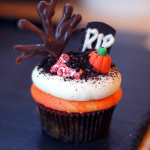 Recipe and photos from Mayhem in the Kitchen!
https://mayheminthekitchen.com/halloween-graveyard-cupcakes/

Have fun and be safe tonight!