My husband’s birthday was last week, and while he’s always up for cake, his real idea of a treat is a nice fruit pie. The day of his birthday, I procrastinated a little and planned on heading to the grocery store right after work, but mother nature had other plans and dumped us with 6 inches of snow, so I ended up getting creative and using the fruit I had on hand. 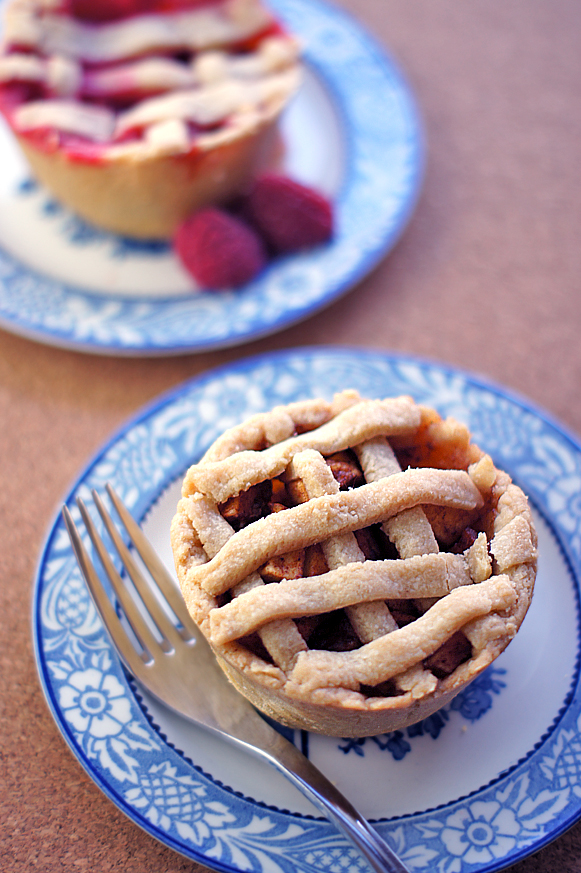 When I checked our fruit selection at home, it was definitely slim pickings: a granny smith apple, some assorted apple wedges I cut up earlier in the week for snacks, a banana, and a few grapefruits. Not an ideal scenario for a pie. Apples would be the obvious choice, but I didn’t have nearly enough. Checking the freezer I thought I had hit the jackpot after finding frozen rhubarb and raspberries, but once I measured them out it became clear that I didn’t have enough for a full pie. What’s a girl to do?

Um, make mini pies of course?! In addition to requiring less filling, mini pies have the added bonus of being undeniably adorable. A Win-Win-Win as Michael Scott would say.

The Apple Pie turns out to be a delicious, albeit a bit uninventive, apple-cinnamon pie. I was short on many of my fall spices, so I focused on cinnamon and sugar, but you could also add some nutmeg if you’re looking for something a little spicier. The Rhubarb-Raspberry Pie is tasty on its own, but neither fruit is particularly sweet, so the filling is certainly a bit tart. Fortunately, the perfect solution to a tart pie is serving it with a little vanilla ice cream! 😀

I used a 6-cup muffin tin for mine, but by cutting your crusts a little smaller and reducing you baking time you could definitely use a 12-cup (or even 24!!) cupcake tin. The apple filling would also be a great base for substitution – pear or peach instead of apple? Delish. 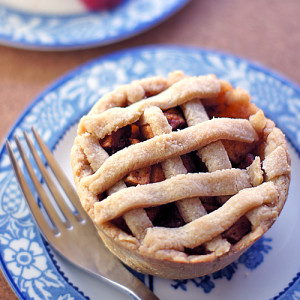