Last week we invited four friends over for a casual dinner party with a small twist – instead of my husband and me doing all the cooking, we bought the ingredients, then invited everyone over a little early to prepare the meal together. 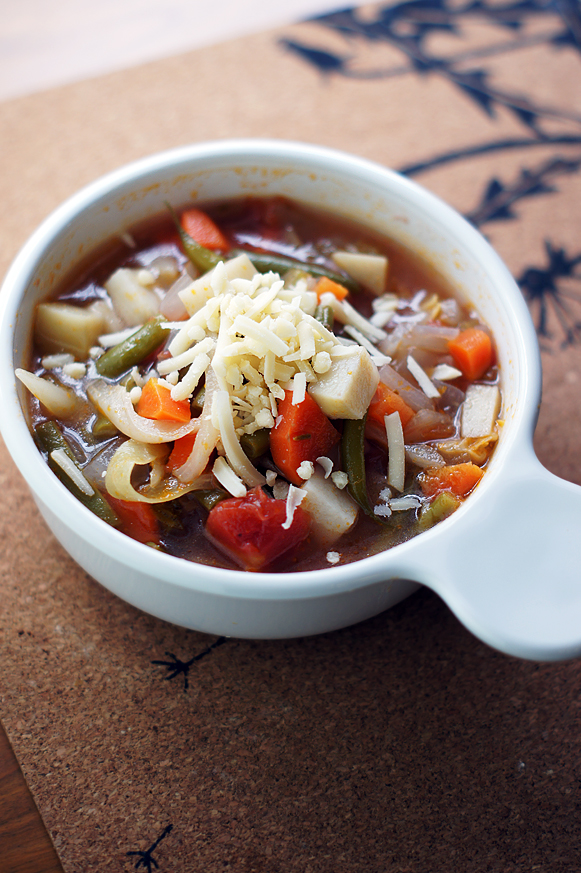 Our theme was Italian cuisine, and we went with four courses:

In our recipe selection we kept a few things in mind – ease of preparation for the less experienced cooks in our group, availability of high quality ingredients (winter in Minnesota can be a rough time for produce), and likelihood of broad appeal.

In hindsight, it seems obvious that we would be stuffed to the gills after a meal like this, but it seemed like a good idea at the time! Plus, with six people cooking, it felt like we needed to make sure there were plenty of things for everyone to help out with.

We found a recipe for Cheese Fonduta on food.com called “Olive Garden Smoked Mozzarella Fonduta” Not the most authentic sounding of recipes, but we liked the idea of smoked cheese, and also the variety of cheeses incorporated into the recipe as compared to others we ran across. We used large ramekins for individual servings, and garnished as suggested in the recipe. In a recipe like this, quality makes all the difference, so, rather than buying a lower quality grated cheese, we bought nice blocks of cheese and used the grater plate on our food processor.

For the soup course, I had a relatively specific minestrone recipe in mind – no pasta, lots of veggies, no pre-made broth. I’ve also been on a Martha Stewart kick lately (ok, yeah, perpetually) so when I found a vegetarian minestrone on Martha Stewart’s site, I knew we were in business. Like most soups, this is a very forgiving recipe, and was a great way for the less seasoned cooks in the group to get involved. We finished this out (step 4) in the crock pot because we were short on stove space, which had the added benefit of keeping it hot while other courses were prepared.

Our main course was The Pioneer Woman’s Chicken Parmigiana with a simple homemade pasta. I was on “team pasta”, and this recipe ended up being more challenging than other pastas I’ve made in the past. The original plan was to make farfalle, but the dough had trouble making its way through my manual pasta machine, so we were forced to break out the big guns and use my Kitchenaid mixer attachment and make rotini. For the Chicken Parmigiana, most of the group ate organic free-range chicken, while I easily created a Vegetarian Chicken Parmigiana by subbing in a Gardein Chick’n Breast and following the rest of the recipe as written.

For dessert we made a lovely Moscato Zabaglione with Strawberries. Originally I planned for either Tiramisu or a Flourless Chocolate Cake, but I’m glad we decided to try Zabaglione – it’s still rich, but not quite as heavy as the cakes we were looking at. Plus I got to use my crystal dessert dishes!

Menu and photographs from Mayhem in the Kitchen!
https://mayheminthekitchen.com/january-dinner-party-menu-italian/