If you’ve been following Mayhem in the Kitchen! for awhile, you might remember that my mum and brother have the same birthday. As a result, every year I find myself trying to bake two extravagant cakes to make sure that neither one of them ends up with Christmas-Birthday syndrome.

Like last year, my brother requested an ice cream cake. While we were talking, he jokingly said that it needed to be a Carvel Fudgie the Whale (something that can’t be found in Minneapolis) which naturally led to a discussion of Fudgie’s creepy friends, Cookie Puss and Hug-Me the Bear. I didn’t speak it, but it was at this moment that I knew what needed to be done. 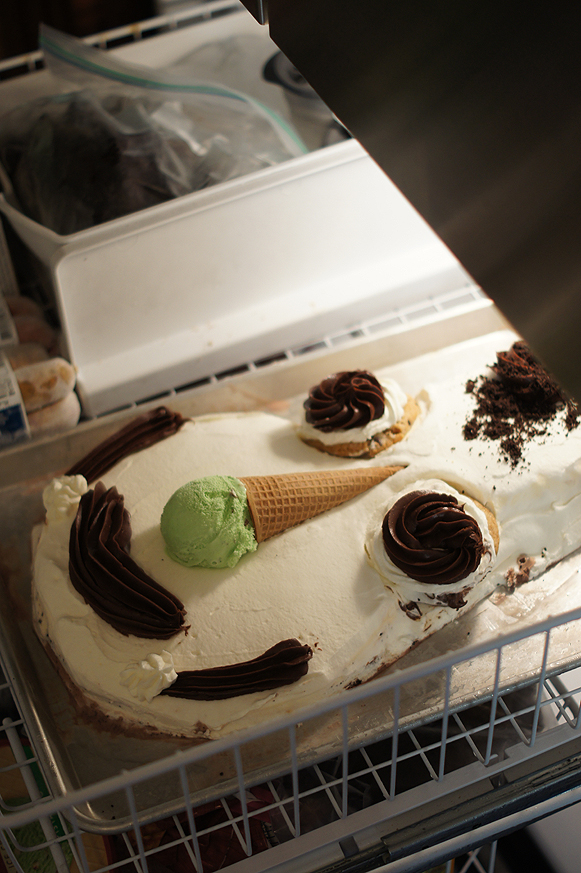 As mid-westerners, no one in my immediate family has actually seen a Carvel Cookie-Puss in real life (though there are plain Carvel cakes in some grocery stores) but he (she?) has become somewhat of an internet sensation over the years, so I felt like I was well versed enough to make a run at it.

Surprisingly, despite his rustic appearance, making a Cookie Puss was a bit of a challenge. In hindsight, just the thought of making an ice cream cake of any kind on an 85 degree day wasn’t my brightest idea.

The real problems started with the shape – in the old days, Cookie Puss was shaped sort of like a lightbulb, round at the bottom, square at the top. Somewhere along the way, he became more number-8 shaped, with small bump-outs to support his gigantic cookie eyeballs. Without a Cookie Puss shaped pan like the pros have, I decided to go old school with the simpler lightbulb shape. I used a 9″ springform pan for his bottom/chin/torso, and filled half of a 5″ loaf pan for his forehead/head/hat (Cookie Puss anatomy is a bit confusing. Don’t bother trying to unravel it.)

Basic construction started with lining my pans with parchment paper for easy removal (See! Planning ahead! So far so good!) I then took a half-gallon of store-bought vanilla ice cream, and mixed it in my stand mixer until it reached a smooth and fluffy texture that was almost like softserve. I scooped the ice cream into the prepared pans, taking care to make sure the layers were the same height, then smoothed them out and placed the pans in the freezer.

While the vanilla layer set up, I put 2/3 of a package of Oreo cookies (“stuff” and all) into my food processor and pulsed until all of the cookies were broken up into a powdery crumble. Once I was sure the vanilla ice cream layer was frozen solid, I heated some hot fudge, and carefully spread it over the ice cream. This was a bit of a challenge, as the fudge cools and hardens once it touches the cold ice cream. The technique that eventually worked for me was to work in small sections – spoon on just a few tablespoons of fudge, smooth it out, and then add more. Once the fudge was spread evenly, I sprinkled it with the Oreo crumbs, then returned the pans to the freezer.

Once the fudge layer hardened, I repeated the same procedure as the vanilla ice cream except with chocolate ice cream, then returned the pans to the freezer for another round of hardening.

While everything re-solidified, I went to work on some stabilized whipped cream icing. I’ve read many times that gelatin is a good way to stabilize whipped cream, but since I’m a vegetarian, that has never been an option for me. But, last year around Valentine’s Day I Amazon-Primed 8 boxes of “vegan jel” to make Vegan Conversation Hearts, so I figured I would bust out a box of that and give it a try! Sadly, the vegan jel is very acidic, and that flavor came through in the icing – it almost tasted like a lemon whipped cream. Back to the drawing board. At that point, it being 11pm, I gave up, said to heck with it, and stabilized it with vanilla pudding. This is a Carvel Cookie Puss replica for my brother, not a wedding cake for Sasha Obama or something. We can use pudding in the icing. Don’t judge.

Once the icing was done, it was time to form the Cookie Puss. Since I thought that it was highly likely this cake would melt in transit, I opted to use a jelly roll pan rather than a traditional cake board. Classy? Nope. Practical? Absolutely. I was grateful for the jelly roll pan decision, because the melty situation was worse than I feared – as soon as I took the ice cream out of the spring form pan, it began to droop. By the time I got the head/neck/forehead piece out of the loaf pan, there were huge chocolate puddles forming. I was concerned the cake would just become a big blob if I kept it out any longer, so I quickly pushed everything into a basic bulb/cookie-puss/pear shape, then placed the entire pan back in the freezer for an hour.

Once everything hardened up, I covered the entire cake in a layer of the pudding stabilized whipping cream, placed the cookie eyes, and added the sugar cone nose. Again, back to the freezer to harden. At this point though, it was certainly looking Cookie Puss-like, and I was feeling slightly better about the entire thing. Perhaps it wouldn’t be a disaster after all!

After the final firm-up session, I pulled out the proto-Cookie Puss and added all of the embellishments that make him so charming. Starting with the eyes, I piped on some of the stabilized whipped cream for the whites of his eyes, then using a large Ateco closed star tip (#856), added a swirl of the chocolate icing from my mum’s cake for his irises, mouth, arms, and hat, with a final swirl of stabilized whipped cream for his hands/mittens/paws. Many of the Carvel Cookie Pusses have colorful sprinkles or sweetened coconut flakes near the hat for (what I presume is) hair, so I added a bit of Oreo crumble just beneath his hat…though I’m not sure anyone will guess that it’s supposed to be hair. Finally, I pulled out my classic ice cream scoop, made a perfectly round scoop of pistachio ice cream, and placed it near the sugar cone as the finishing touches of his ice cream cone nose.

I really have mixed feelings about this thing. On one hand, he looks absolutely horrifying, but on the other, so do the ones from Carvel, so I guess he’s true to his source material? Improving upon him would’ve been disrespectful, right? Ha.

Did you ever get Carvel cakes as a kid? Here in Minneapolis, the Dairy Queen reigns, so while we definitely enjoyed our fair share of their ice cream cakes for celebrations over the years, a Fudgie the Whale cake was never an option. Recently I’ve had a Coldstone cake or two, but they’re so expensive! Then again, this experience was kind of harrowing, so perhaps that price is well earned. I’m glad I did it, but I think I’ll stick with last year’s version! 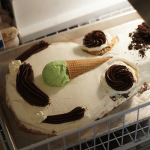 Recipe and photos from Mayhem in the Kitchen!
https://mayheminthekitchen.com/homemade-carvel-cookie-puss/